Labour’s headline housing policy is the pledge to build 200,000 homes per year.

This policy suffers from being both not particular popular and not being particularly right.

It is also not particularly new.

This graph shows what actually happened to the number of homes built by private enterprise in England over that period. 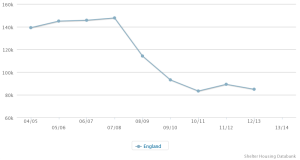 Simply having a housing target will not get houses built anymore than a New Year’s resolution to get in shape will get you a 6 pack.

But, you might say, Labour is in opposition, they can’t build houses. This is a fair point. However, they also can’t freeze energy prices but they have pledged to do so. y

You only have to compare the amount of debate there has been about Miliband’s promise to freeze energy prices with the lack of enthusiasm about the housing pledge to see that Labour’s housing policy is yet to catch the public’s imagination.

Even the reaction by the audience of loyal party members to the pledge when it was announced was underwhelming.

Why is this, given that most people in Britain agree that there is a ‘housing crisis’?

Perhaps getting angry at the reasons for the lack of demand for houses in places like Stoke might be a better electoral strategy for Labour.

4 thoughts on “Off target”