Although he is now almost universally revered, Martin Luther King was not particularly successful in his lifetime in convincing the American public of the merits of passing and enforcing new civil rights legislation. His non-violent approach to protesting was viewed with suspicion by many people, even those who passively supported the cause. From the mid 1950s, if not earlier, most Americans were against the idea of segregation in education. 55% of Americans agreed with the Supreme Court’s decision in the famous case of Brown v Board of Education. However, a sizeable, geographically concentrated and well organized group of Americans opposed integration and the introduction of civil rights laws.

This was the context that the civil rights movement operated in.

The challenge for Martin Luther King and those involved in the civil rights movement was partly to convince members of the public who were undecided on the issue. Far more important was to apply pressure to secure the passing of civil rights legislation and to do so in such a way that did not fundamentally undermine the public’s support for the introduction and enforcement of new laws.

Public opinion did not go against the idea of passing new civil rights laws as a result of the civil rights movement. This in itself was a major achievement of the movement. In 1964, 62% of Americans supported the idea of “a law to guarantee blacks “the right to be served in any retail store, restaurant, hotel or public accommodation,”, very similar to the number who had supported Brown v Board of Education in 1954.

However, the public was not nearly so sympathetic to the way in which civil rights legislation was enforced.

When asked in 1959, most people in America believed that the Southern states would not have integrated schools without the Supreme court’s ruling. However, 53% also believed that the ruling had been “more trouble than it was worth”

The public mood continued to be ambivalent towards the enforcement of civil rights laws. In 1957 33% thought that the Federal government was putting too much pressure on school integration, while 34% thought it was putting the right amount of pressure on and only 19% thought too little pressure was being applied. In 1964, fully 62% of people thought that the Civil Rights Act should only be introduced using a “gradual, persuasive approach” with only 23% supporting the idea of “”strictly enforced [the act] from the beginning”. When asked how they would describe the pace of change on the civil rights question in December 1964, 57% of people said “too fast”.

The question of enforcement of any new civil rights laws was a complex one in America. The idea of the Federal government forcing States to enforce locally unpopular but nationally popular laws was politically difficult because of the history and legacy of the American civil war.

Rather than convince the American public that it was necessary to immediately enforce new civil rights laws, the civil rights movement and Martin Luther King were able to successfully convince the Federal government, and politicians such as President Lyndon B. Johnson, to not only pass but also enforce these new laws.

It is commonly thought that Martin Luther King’s support for a tactic of non-violent was instrumental in the successes of the civil rights movement. People who believe this often say that the public are more receptive to non-violent protests that violent direct actions. This may well be the case. However, we should not exaggerate the degree to which non-violent protests either persuaded the public or were even supported by the public.

In 1961, 57% of people said that sit-ins at lunch counters would “hurt African Americans’ chances for integration?”. In 1963 only 23% said they felt favourable towards the famous march on Washington DC with 42% saying that they felt unfavourable. In 1964 when asked whether people thought “mass demonstrations by Negroes are more likely to help or more likely to hurt the Negro’s cause for racial equality?” only 16% said they thought the demonstrations would help. In fact, that number is slightly misleading. Only 10% of white people said they thought that the demonstrations would help, while 55% of African Americans thought they would help.

Perhaps most surprising for us now is the hostility that Martin Luther King personally attracted at the time. He is now held in almost universal esteem. In 2011, 94% of Americans said they had a favourable view of Martin Luther King. However, this was not the case while he was alive. For example, in 1966 50% of the American public said that they thought Martin Luther King was hurting the civil rights movement, and only 36% said he was helping the movement. 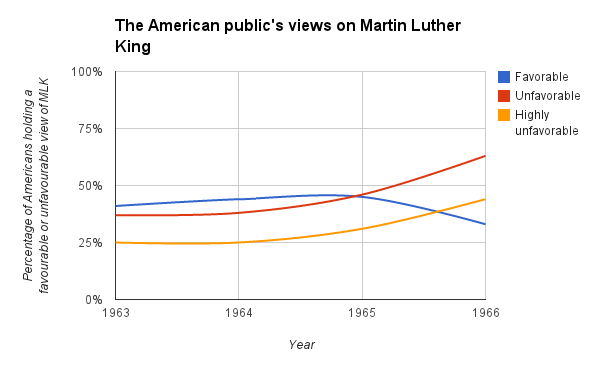 It may well be the case that if the civil rights movement had adopted violent tactics such as those used by other movements such as the ANC in South Africa, public support for the movement’s tactics would have been lower still. It may well be the case that violent tactics would have been less popular than non-violent tactics. However, the tactics of the civil rights movement in general, and Martin Luther King in particular, never had the support of the majority of the American public, and did little to convince the public of the need for tough enforcement by the Federal government of new civil rights laws.

***
Dr KING AND THE MOVEMENT

Some might think that Dr King summoned up the civil rights movement out of nothing with just the power of his rhetoric. This was obviously not the case. The long history of organization on the civil rights issue goes back long before Dr King and includes, for example, the founding in 1909 of the National Association for the Advancement of Colored People (NAACP).

Part of the success of the NAACP and other associations such as the Southern Christian Leadership Conference and the Student Nonviolent Coordinating Committee can be attributed to the work organizers did on the ground. Ella Baker (http://en.wikipedia.org/wiki/Ella_Baker) is perhaps the most famous example of the inclusive methods that were used to encourage people to join these associations. As she once, caustically said the “movement made Martin, and not Martin the movement.”

The case of Martin Luther King and the civil rights movement shows how hard it is for any prominent figure to convince the public to change their mind on important issues. It also shows what can be achieved when a network of organized individuals and institutions consistently applies pressure on politicians to achieve changes in the law. Part of applying this form of pressure involves having articulate leaders who can meet with politicians and address rallies. However, just as important, if not more important, is the need to have a large number of people and institutions organized and involved in the struggle. This remains just as true now as it was in the 1950s and 1960s.

I will write a further post this week on what present day organizers can learn from the tactics of the civil rights movement. Watch this space.