I will start a new role as CEO of The Peel Institute in January 2017. The Peel is one of the ‘community hubs’ that operate within the London Borough of Islington.

What problems should organisations like the Peel attempt to address?

There are many answers to this question. For example, some would say community cohesion or ‘placemaking’.

No doubt these are both important issues to address. We have to continue to build good relationships between people from different backgrounds and neighbourhoods that people enjoy living in.

However, tremendous strides have been made in both these areas. 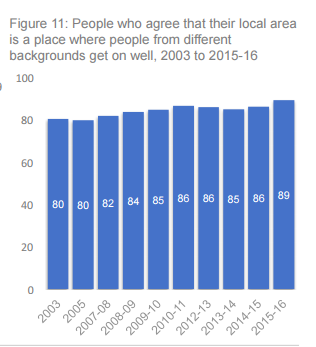 And this chart shows the percentage of people who are satisfied with their local area as a place to live.

As you can see from both charts, people are, by and large, happy with the neighbourhoods they live in and believe that people from different backgrounds get on well together.

One of the reasons for this may be the focus on ‘involvement’. It’s often assumed that the way to give people a greater sense of control is to create mechanisms whereby their voice can be heard. These are often called things like “forums” or “panels” etc…

Actually, as the chart below shows, people are not that keen on being involved in the bureaucratic processes that surround council decision making.

The conundrum could be summarised as:

Pioneering new approaches to solving this issue is as pressing a matter as building good relations and improving the quality of local places.