Do slums exist in the UK? It’s more complicated than that.

Peter Marcuse’s blog has a ‘critical discussion’ on the nature and role of slums. This lead me to ask whether there are slums in the UK, or, more specifically, whether housing in poorer parts or areas of the UK is of substantially worse quality that in richer parts. 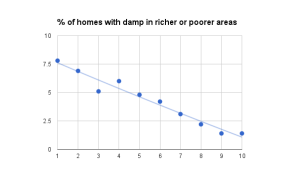 Many people’s initial reaction to this would be to say of course housing in poorer areas is of a worse quality than in richer areas.

It’s certainly true that, as this chart shows, the poorer the area the more likely it is that housing will have damp. 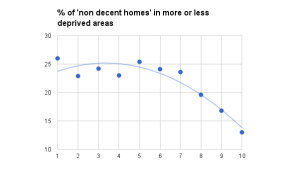 However, if we look at a different wider measure of housing quality (the decent homes standard), the picture is more complex.

There are a similar percentage of homes that don’t meet the decent homes standard in the poorest areas of the UK as there are in areas of average wealth. 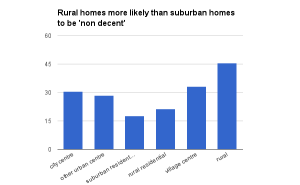 The picture gets still more complex if we look at a different way of dividing areas, not by wealth but by whether they are urban or rural. 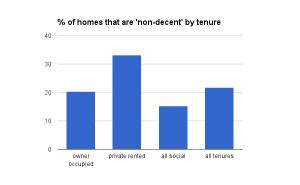 Part of the explanation for this complex picture is that social housing in the UK is often kept to a good standard, while lots of private rented housing is not kept up to standard.

What to conclude from this? Perhaps the idea of area based housing initiatives in the UK is wrong headed, and a strategy to improve the quality of housing in the UK should focus on giving individual homeowners, landlords and tenants, the right support and incentives to bring all homes in the UK up to a decent standard.