He wasn’t writing about gentrification but perhaps the sentiment applies.

Many writers are tempted to suggest that examples of gentrification and displacement in certain London neighbourhoods tells us a lot about what is happening throughout London.

For a classic example of this genre see this recent piece in the NewStateman.

A recent piece in The Atlantic makes quite a different argument, claiming that in 22 of the 55 biggest cities in America, including San Diego, Charlotte, Buffalo, Pittsburgh and Detroit, gentrification affected 5 or less percent of all neighbourhoods.

What’s the situation in London? How widespread is gentrification?

Here is a map of London in 2011. Neighbourhoods that are dark red have a higher percentage of residents that work in routine or semi-routine occupations (all data from the census).

The picture is pretty clear. In large parts of East and West London and parts of North and South London there are lots of neighbourhoods where a large number of people work in routine or semi-routine jobs.

However, in inner London, near the Thames and to the West, there are neighbourhoods in which there are very few residents who work in routine jobs.

In contrast, here is a map of London in 2011. The neighbourhoods that are coloured darker blue are home to a higher percentage of residents that work in senior management positions. 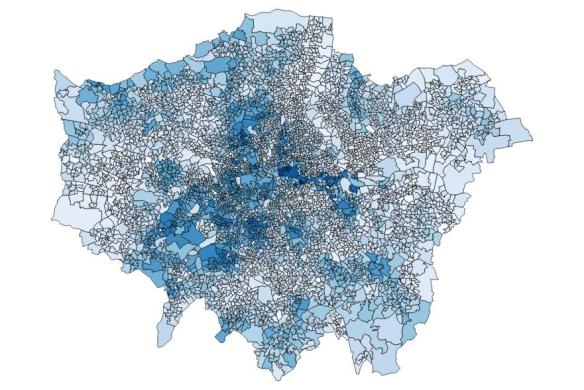 In both cases, what is striking is not an image of constant change but of continuity.

So what? It’s probably no surprise to anyone that Barking and Dagenham has lots of residents that work in routine jobs and Kensington & Chelsea has lots of senior managers.

1 thought on “Gentrification is not for everyone”