The benefits system is Britain is fundamentally flawed. The way it is designed means it guaranteed that people who claim benefits will be stigmatized. What’s more, we have a political class and media who are doing little if anything to address this problem. Worse, they are, in many cases, actually making it worse.

That is the damning finding of thorough new report from researchers at the University of Kent.

There headline finding is that there is a large stigma attached to claiming benefits in Britain. This has a damaging effect on the wellbeing of people who claim benefits and it also explains some of the “non-take-up of benefits and tax credits”

Why is this the case? The report gives many answers but one of the most powerful is the benefits system is heavily based on the means test and;

“International evidence suggests that countries with benefit systems based on contribution or on citizenship, rather than on a means tested basis, are less likely to see high levels of benefits stigma.“

This may seem counter-intuitive but, as the reports authors point out;

“claimants of most means-tested benefits are consistently seen as less deserving than claimants of more universal benefits… Selectivity by its nature draws attention to the threshold between the ‘needy’ and the rest, whether this ‘needy’ group are themselves to blame for their situation, and whether claimants are appropriately grateful for the money, all of which are de-emphasised for more universal benefits”

This is important because “the UK is a country that relies much more heavily on means-testing and much less heavily on contribution than most other European countries”. What is true for the UK is even more true for the US where “welfare” is used as a term of abuse.

The reports authors conclude, therefore, that “Changing the way that benefits are delivered is perhaps the most obvious place to start trying to reduce stigma.”

What might “changing the way that benefits are delivered” involve? It might include “progressive universalism” where most households get some benefits but certain groups get more than others. It could also involve more sophisticated forms of personalization, where households are given help depending on their individual situation. Perhaps more controversially it could mean introducing a more “contributory” aspect to benefits, for example, giving people a percentage of their previous income for a period of time after they are made unemployed.

Perhaps just as importantly it means changing the culture within the benefits system. This goes deeper than a conversation over whether it is the private or public sector that should be doing the actual benefits assessment. It means changing the system so that claimants do not feel that they are the hapless recipients of generous “gifts” from the state and so that the assessors do not see their primary role being around preventing fraud.

If I had one slight criticism of the report it would be the prominence that it gives to the role of the media in creating stigma.

The report partly originates out of a concern that the media is running more and more inflamatory comments about people who claim benefits and that this is creating a more and more hostile climate. However, the report is far more subtle than that in its exploration of public opinion and the media.

The authors state that “there remains a possibility that people who think benefits claiming is shameful then choose to read stigmatising newspapers (or that newspapers simply respond to the views of their readers)”.

I find this a very hard argument to dispute. Newspapers are private businesses that try and understand what their customers want and then give it to them. This applies just as much to opinion pieces as it does to which news stories are given prominence.

The report contains some experimental research to see what impact the media could have on people’s opinion. On the basis of this approach they conclude that their intervention had a “relatively small” impact (0.05–0.20 points on a 0–10 scale). I am perfectly willing to believe that reading a certain newspaper might give someone a 2% greater chance of thinking there is a stigma associated with claiming benefits.

Is this really such a big deal in the grand scheme of things? Certainly not when you compare it to the fundamentals of public opinion on benefits.

The vast majority of people believe that large numbers of people are eligible for benefits and fail to claim them. This is true now and has been consistently true for the last 30 years, regardless of media scare stories. 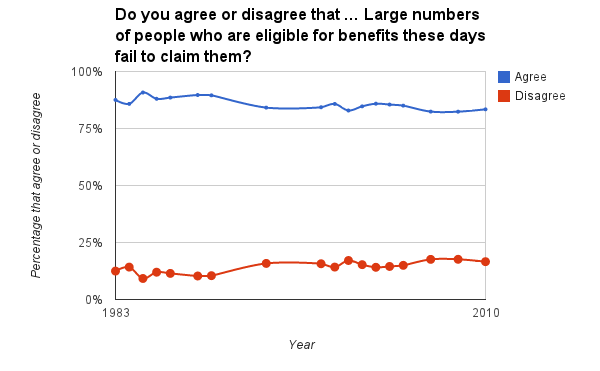 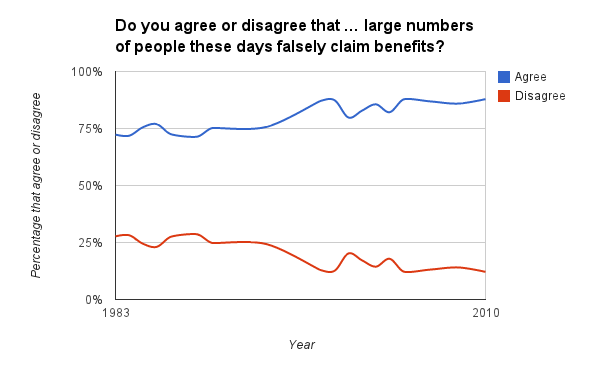 The report makes some recommendations for how journalists could improve the quality and accuracy of stories about benefits. I would say that these have as much chance of being implemented as I have of being selected as the Republican candidate for the 2016 election.

However, the report should, and I hope will, have a profound influence on how the Labour party thinks about the benefits system.