Many of us are waiting for Superman to save us but he never will unless we learn to save ourselves.

We can see this playing out on both sides of the Atlantic over the issue of gay marriage. In the United States, Barack Obama has said that he personally supports gay marriage (although he will still leave actual legal decisions up to individual states), whereas in the United Kingdom, David Cameron has signalled that he will not be actively implementing legislation to allow gay marriage.

Each politician has been both criticised and praised by opponents or supporters for either being brave and courageous or pathetic and craven. Both have been celebrated for having stood up for what they believe in and criticised for bowing to pressure from organized groups in society.

But these views fundamentally misunderstand how societies change and what the role of politicians is in this change. It’s not Presidents or Prime Ministers that make countries more tolerant, inclusive places, its average people going about their daily lives that does that. Politicians respond to these changes in society, building alliances and passing laws that reflect the priorities of these alliances, not conjuring up new attitudes out of nowhere.

Let’s look more closely at the issue of gay marriage.

It is certainly striking how much more tolerant the American people have become since around 2004. This graph shows the number of people who favour allowing gay marriage in America. You can see that it is going up. 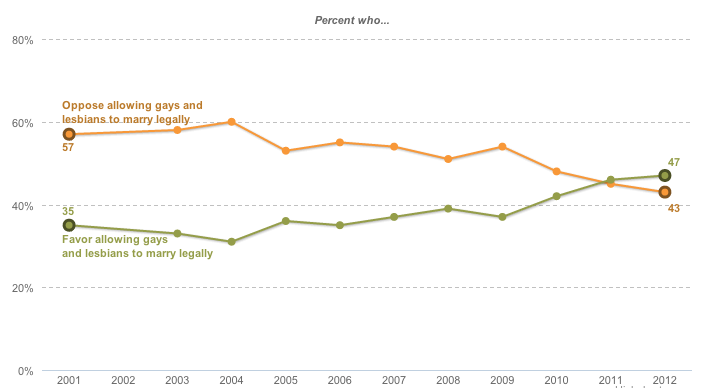 Why might this be? Let me put forward the theory that it is because more people know people that are openly gay.

Here is a graph (taken from polling data here) that shows that the percentage of Americans that say they know someone who is openly gay has dramatically increased over the last 10 years. 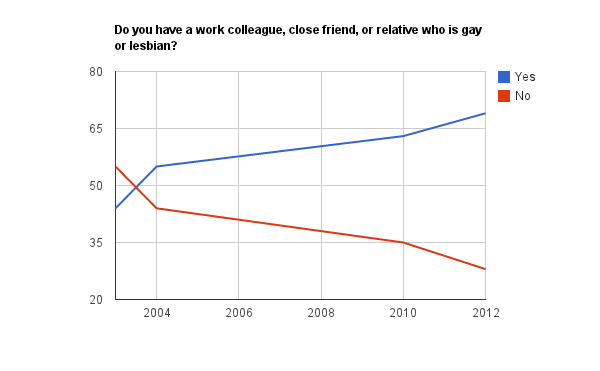 Different people advocate different tactics for making countries more tolerant. Some try to ridicule people who oppose greater tolerance. Some try to make reasoned arguments for why tolerance is better and hope to convince their opponents. Others try and use money and organization to force and cajole politicians into passing laws that support tolerance.

There is something to be said for all of these tactics, but ultimately, none of them are nearly as effective as the cumulative effect of large numbers of people interacting with friends, relatives and colleagues and slowly coming to the realization that there really isn’t anything to be feared from gay marriage. It is people coming out in their neighbourhoods, to their families and in their workplaces that is making America a more tolerant place. Obama is just reflecting that.

We may hope that a powerful politician will sweep into power and decree that the country will be a more tolerant place with a swipe of their pen, but that’s not how the world works.

Firstly, there is always the danger that a leader supporting a particular cause will not convince opponents that it is right but will, instead, make them even more resolute in their opposition. They are opponents after all and not really inclined to listen to the other side’s arguments. Secondly, there is the fact that, by and large, we only want our politicians to do things that are popular. Indeed, the whole point of democracy is that we do not have politicians that decide what is right or wrong entirely independently of what the public think. In fact, maybe it’s a good thing that politicians try and work out what the public think and try and stick close to it?

As Bruce Springsteen says, you will “waste your summer praying in vain/ for a saviour to rise from these streets.”